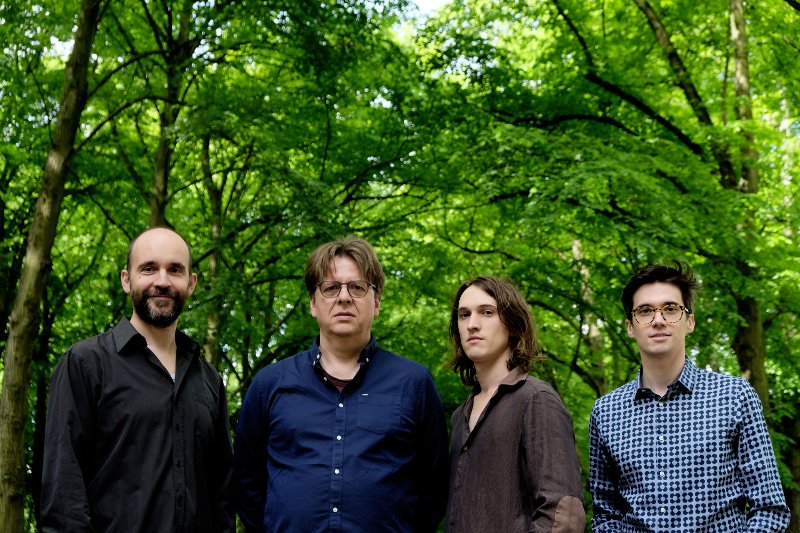 A new breath for Saxkartel -

Saxkartel always occupied a special place in the ‘Belgian house of jazz’. Chamber music, an uncommon line-up, Jazz that grooves without a rhythm section … Does that sound like a contradiction? Saxkartel already proved in the past that the answer to that question is ‘no’.

Today Tom takes the quartet a step further: (organized) atonality and asymmetrical grooves have become important ingredients in the new repertoire. And let it be clear: there's a lot of composition to it, but these compositions only start a real life when spiced with solo's from the four of them.

You want to know when we play a concert or release an album?
E-mail us your email address through the contact form to be put on the mailing list ... .

Saxkartel plays jazz and modern music in a less usual way. They bring a chamber-like music with only 4 saxophones without the accompaniment of a rhythm section. This group can best be compared to a string quartet, although they make a very different and clear choice of repertoire: jazz is their starting point, and besides a lot of composed material, the elements 'groove', 'swing' and improvisation are the most important ingredients of the music they make. And the intimacy and vulnerability of this setup disguises of course their real force.

In november 2007 saxkartel produced its 2nd album yellow sounds & other colours (released by de werf). It is an album that not only illustrates the collaboration with Tutu Puoane, but also the one with Frank Vaganée who joined the quartet after Robin Verheyen's departure to the States. In december 2007 saxkartel played a cd-release concert tour in theaters all over Flanders.

Saxkartel was able to record this cd in one of the finest recording studios of France, as a result of the first prize they won at the jazz contest of Tremplin Jazz d'Avignon a year before (august 2006)

In June 2005 saxkartel played at the festival Jazz à Liège. Also in 2005, Tom Van Dyck was asked by Liesbeth Vereertbrugghen (KLARA) to write contemporary arrangements based on the 'Llibre Vermell', a collection of medieval songs. This music accompanied the children's sing and dance spectacle 'Red Shoes'. This show was presented at the "Dag van de Oude Muziek" in Alden-Biesen, at the theater "'t Eilandje" in Antwerp and in "de Bijloke" in Gent.

In march 2004 saxkartel was invited by JazzlabSeries to participate in a tour together with another one of Tom's projects, Odds On.

In april 2003 Saxkartel was invited by Mark Van den Hoof and KLARA (VRT) to record their repertoire during three days in their studios. Based on these recordings the record label IGLOO issued their first album Airdance in February 2004.